Foix, prefecture of Ariège located in the Midi-Pyrénées region is dominated by its castle which stands on a rocky outcrop, testimony of the medieval past of the city. Historical heritage around the Castle of the Counts of Foix discovered while walking in the streets of the old quarters of the city with its sculptured fountains, its half-timbered facades, squares, its church of the ninth century, the Church of St. Volusien at the foot of the castle, built in the twelfth century and rebuilt in the Gothic period. The surrounding area offers remarkable natural sites and stunning scenery, varied and preserved. Throughout the year, Foix offers many cultural and sports events: major pageants in August, craft markets and street entertainment, September fete, fireworks ... 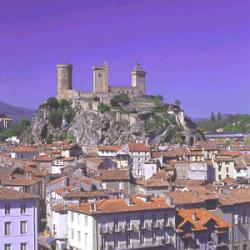 The church, located at the confluence of two rivers Ariege and Arget is, with the castle of Foix, a monument reflecting the rich history of the city. Built around 860, it was a privileged place of political and religious life in Foix. Saint-Volusien Church has undergone several revisions after the destruction caused by the Wars of Religion. Reconstruction work was then undertaken in the seventeenth century and a Gothic church was built on the ruins of the old Romanesque church. Finally, recent restoration, begun in 1963 helped make the building to its original beauty.

Of medieval church, the abbey of Saint-Volusien still retains the portal whose arches fall four capitals decorated with plant motifs and lions, the base of the walls of the nave and the crypt. Inside, the stalls of the seventeenth century came from the Abbey of Saint Sernin. There is also an organ built by Fermis 40 games in 1869 and restored in 2007. 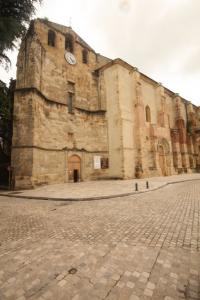 Built in the eleventh century and deemed impregnable, until now it has preserved its medieval fortress. The Foix castle, with its three towers and high walls, rises above the rivers and Ariège Arget on an imposing rocky outcrop overlooking the medieval town of Foix. It offers a superb panoramic view of the mountain landscape of the Pyrenees.

The Foix castle was until the late Middle Ages the symbol of the powers of a powerful lordship: the county of Foix. First main fortress of the Count of Foix, the castle housed the garrison then at the end of the Middle Ages and participated in the defense of the city thanks to its strategic position and might serve in prison for several centuries before being Historical Monument in 1840 . It now houses the Museum of the Ariège devoted to the history of this area since prehistoric times. Visit to the Castle allows, in addition to discover the architectural quality of this monument, access to exhibits for addressing different aspects of life in the Middle Ages in the county of Foix and Ariège. Summer, remarkable performances are held. 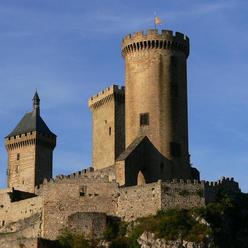 At the foot of the castle stood the old town of Foix, whose current aisles were Villote limit.

First, Foix grew around the St Volusien abbey dice the ninth century, and the castle of the Counts of Foix, from the year 1000;

It had its heyday in the fourteenth century.

A walk through the narrow streets of the center to discover its medieval heritage. You will find the most beautiful half-timbered houses and street Lafaurie Place Parmentier. 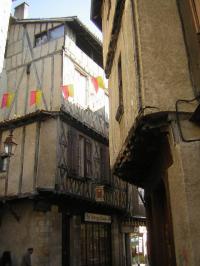 Rue des grands ducs, the first vestige medieval village, you can admire the Pontils, air passages between the houses. Street rival: a carved wooden door, dated 1617 is a historical monument. 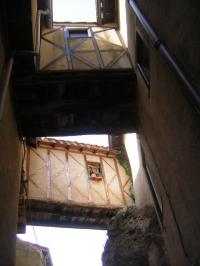 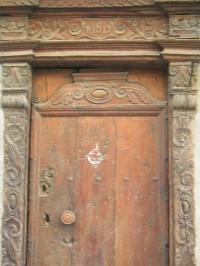 Rue des chapeliers: At No. 23 was the Hotel de Treville Serene (Family Treville, captain of the king's Musketeers, a friend of d'Artagnan) 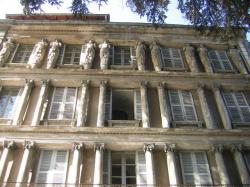 Rue du Palais de Justice: first settlement of the city between the XIIth and Xéme. This is where was St Nazaire, the early church of Foix. In 1933, three sarcophagi of the Middle Ages were discovered: 1er City Cemetery.

House called St. Helena Avenue Caranne the property of the municipality at least until July 2003 (contested sale ...): Built by a soldier of Napoleon belonged to the poet Raoul Lafagette, his field contains a cave underground River Labouiche and the film "The Inn of the Abyss" Willy Rozier was shot here in 1942.

As you walk, notice the fountains (fountain goose up Labistour St., courthouse fountain and square Arget) 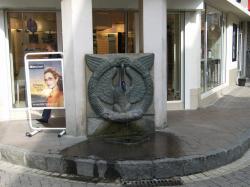 Allées de Villote: located in the Middle Ages out of the city walls built in 1330. Executions were operated there ... 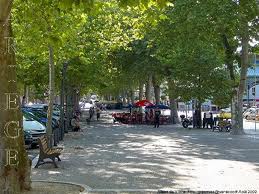 ...Villote: From "Upper Town". In 1792, the first tree planting of grading and excavation in 1820 (on the occasion of "the construction of the former barracks which demanded considerable excavation of land use by spreading it on the lower parts Drive ").